Tonight, I’m going to another Avs game, so you can expect yet another post about one of those in the near future. In the meantime, I thought maybe there was one person on the entirety of the internet might be 1% curious about what I wear when I go to these. And if there is one person on the internet who wants to know, well, they deserve to know.

That’s what I’m all about, man… bringing important information to the masses.

First, and most importantly, the jersey. 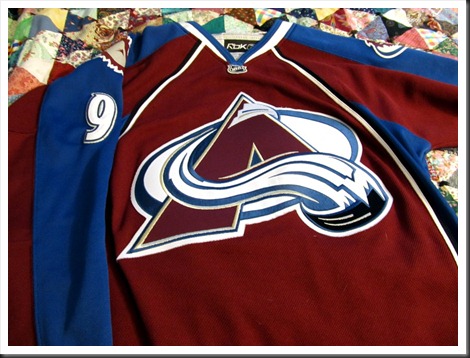 Unfortunately, you have to add the cat hair yourself.

Without a doubt, my hockey jerseys are my most favorite items of clothing. This one is my Duchene jersey, and I’m wearing it because this is the first time I’ll get to see him play in person since he came back from the injury that had him out for about a month and a half. Sometimes I wear my O’Reilly jersey, which is my newest one that I got for Christmas this year. My other two jerseys are Peter Forsberg and Dan Hinote. I don’t wear those two as much, just because they’re the old style and are less comfortable to me, but the Dan Hinote one went with me to Military Appreciation Night, on account of him being American and having gone to West Point.

It gets cold in the Pepsi Center, since, you know, there’s a big slab of ice in the middle of the room, so underneath the jersey, I wear a nice long sleeve shirt like this one: 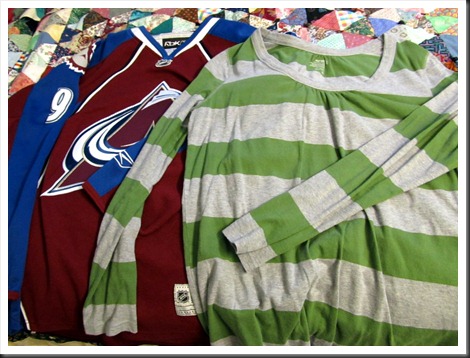 Super stylish. Too bad no one will see it.

I’m not taking a picture of my jeans because they’re jeans. I trust you know what jeans look like. 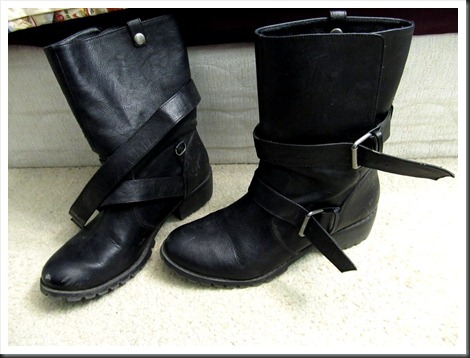 I wear these boots because I love them, and also because you never know when you’re going to have to kick a Red Wings fan. Yes, we’re playing the Columbus Blue Jackets tonight, but the last time I was at a game it was against the Carolina Hurricanes, and I saw a guy in a Pavel Datsyuk jersey. (I did not kick him but I will admit to fantasizing about it a little bit.) 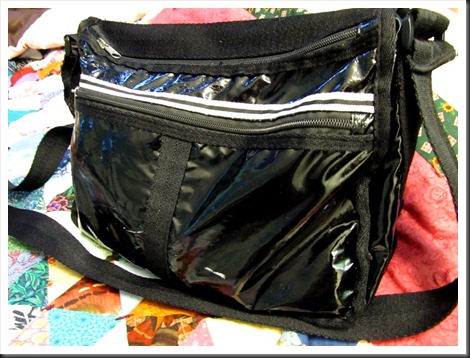 I know you are probably jealous of this incredibly fashionable accessory. It’s black, first of all, so it matches my shoes, which is something you’re supposed to do when you care about your clothes (I think). I also enjoy that it has a lot of pockets, and it’s big enough to fit a book inside. (The book is for the train ride there. I don’t read books during games.)

All right, here’s our outfit summary:
Colorado Avalanche jersey: Pepsi Center store, $175 (it was on sale at the last game of last season, normally they’re $200) (I feel the need to clarify that I had a job back then)
Stripey shirt: Old Navy, maybe like $15
Jeans: Gap, I forget (but my mom probably bought them for me because I’m poor now)
Boots: Target, I forget (my mom definitely bought them for me)
Purse: Target, I forget (because it was like three years ago that I got it)

Alright, I’ve gotta go put these clothes on now and go to the game. BYE.

Posted by Sarahcastically at 4:06 PM

Email ThisBlogThis!Share to TwitterShare to FacebookShare to Pinterest
Labels: clothes are super important and deserve to be blogged about always, let's get some shoes, matt duchene makes an appearance