A Mixtape For My Avs

I don't see any reason to beat around the bush here, so I'm just going to come out and say it... I love you. I've loved you since I was thirteen. I'm 23 now. That's ten years. Ten whole years. An entire decade... wow. I'm making myself feel old.

The point is, I've loved you long time, and I will love you long time from now. Even when we go through seasons like this one together.

I went tonight, and you lost to the Oilers 5-1.

Are you okay? What's wrong? Can I help somehow? I love you. I'm here for you! I JUST WANT YOU TO BE OKAY.

I have this thing that I do for... entities... that I care deeply about, and that is make them a mix CD. My actual romantic life has an ultra-pathetic track record, but since you are not actually my boyfriend, and are in fact an amalgamation of a bunch of dudes, this cannot possibly backfire on me the way it has in the past.

Avs, I made you a mixtape, because I love you and I want you to feel better. I jumped on this bandwagon ten years ago, and I'm not jumping off any time soon, no matter what. I'm here for you.

Songs For Hockey Players To Listen To As They Cry Themselves To Sleep After Losing To The Worst Team In The NHL:

Songs For Hockey Players To Listen To To Get Pumped Up And In A Badass Mood For Their Next Game:


Posted by Sarahcastically at 10:25 PM No comments: 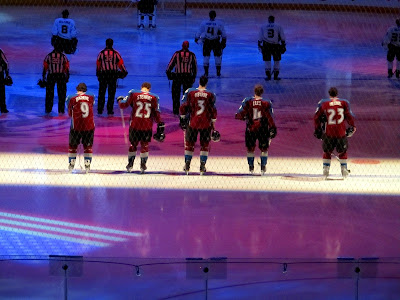 Since I've been back in Colorado I've been really into hockey again. I've loved the Avs since I was 13, but during college I sort of got distracted on account of the fact that I was in another state (Texas) and had no interest in the local NHL team (the Stars) and was also trying to get this thing called a diploma within the allotted time frame. Considering how much time I devote to watching hockey a week nowadays, that is probably a good thing. If I was in school right now, I'd be failing every class.

In the last four years, the only things I paid attention to when it came to the Avs was whether or not a) Joe Sakic retired, b) they traded John-Michael Liles, and c) they made the playoffs. He did, and they didn't, and it was up for grabs when it came to that third one. The point here is that I didn't know anything about the team anymore when I came back and started watching again. I didn't know anybody's names anymore. I didn't know about goalie Craig Anderson, or coach Joe Sacco, and I definitely didn't know a thing about first round draft pick Matt Duchene, who has pretty much stolen my heart away from every other hockey person who ever had it, for reasons that will be outlined in a forthcoming post.

The team I grew up watching was one that won, was a team that had never missed the playoffs. Sure, they had their embarrassments - they haven't won the Cup since 2001, so that means that all the years since, they were eliminated in some fashion from the playoffs. I remember that horrible game 7 against the Red Wings in 2002 like it was yesterday. So yeah, there were heartbreaking moments in those years, but at least we were making the playoffs. The first time they didn't happened while I was at school, and the distance I had made it hurt less. In fact, I don't remember it hurting at all. It was one of those "oh... that's a shame, oh well, next year" moments where I read the article online and then moved on to whatever else.

Right now, I can't imagine being able to do something like that ever again.

Coming back after a four year hiatus, this team is completely different from how I remembered it. It's younger, it's faster, it's less experienced... it's a team that has mountaintop highs and bottomless pit lows. And it's a team that I don't think is going to make the playoffs this year.

Which is fine! Well, not "fine" fine, but it's not the end of the world. Only 16 teams out of the 30 in the NHL make it to the post-season! And everybody knows the Western Conference is insanely close every year. Even the Blackhawks have had trouble staying within the top 8, and they won the Stanley Cup last year. So not making the playoffs is not necessarily an indication of whether or not your team is talented.

I know it's not over yet, I know we've got plenty of time left to see where this is going, to see if the Avs can break out of this awful slump they're in right now and start winning again. I'm not counting them out yet. I have faith in them. I have faith in Milan Hejduk, I have faith in Paul Stastny, I have a ridiculous amount of faith in Matt Duchene, maybe more than I should. I love them all, I love this team, and I want to believe in them, so I do.

Maybe it's stupid to care so much about a sports team. But while this team is young and fast and inexperienced and not at all confident right now, while they're in a losing streak and seem generally pretty discouraged and downtrodden, they're also passionate. And that's why I love them so much.

They're not doing so good right now. They're reminiscing about the glory days of Joe Sakic and Peter Forsberg and Patrick Roy, and probably, we all are. But I'll be damned if this team isn't going to live up to that legacy. Give 'em a few years and they'll be back to being one of the "prime time teams in the league," as Matty D put it during All Star Weekend. I've got faith in these guys. 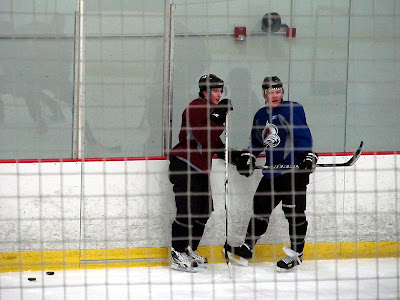 Posted by Sarahcastically at 10:28 PM No comments: