It’s My Fault You Had to Sleep On That Air Mattress, JML

Let me be clear: I am NOT a superstitious person. I don’t believe in lucky clothing or anything like that.

However. I blame myself for this. 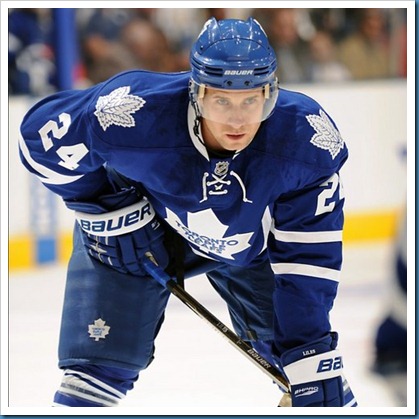 This is the only sports-related thing I can ever remember being superstitious about. Let me explain now, with an unnecessarily long backstory.

I love hockey jerseys, and if I had an endless amount of cash to throw around, I am scared to think how many I would own.

My first jersey I got shortly after I became obsessed with hockey for the first time, which was in the fall of 2001. I had watched the Avs win the Stanley Cup that June and had become enamored. The following November, my dad came home one day and said he’d won two free Avs tickets in a raffle at his work. That was when it truly took hold.

That particular game (against the Wild, Avs won 1-0, one of Roy’s shutouts, Chris Drury scored the only goal in the first minute of the first period) was a “player pin night.” They were giving out little cards with a jersey shaped pin on them. It was Dan Hinote night. (Here's a picture of the card I got that I took today, because of course I still have it - OF COURSE.) I remember going up the escalator in the Pepsi Center atrium and saying to my dad, “this guy is going to be my favorite player.” Completely arbitrary at the time, but I committed to that statement the way most 14 year olds can’t commit to anything.

I asked for a Dan Hinote third jersey for Christmas – the old burgundy thirds – and got it. Over the next few years I received several other pieces of Hinote memorabilia as gifts, including a signed puck and a signed and framed picture. It got to be kind of a joke after a while, but I stand by my choice. Who among Avs fans would dare contradict my love for Danny Hinote? Nobody, that’s who. Guy was a role player for sure, but he brought a magic kind of heart to that locker room that hasn’t been easily replaced.

(He’s an assistant coach in Columbus now, and I am forever hopeful that one day he’ll work for the Avs in a coaching position. I’d happily wear my jersey again in his honor.)

After a while, I started itching for another jersey, because as I became more aware of how hockey worked, I started to realize that I had picked a guy to love that the casual hockey fan (i.e. the people I encountered in my daily life at that point in time) didn’t recognize. Peter Forsberg had finally returned after the spleen incident, and I finally got to see him play, and I finally learned that he lived up to the hype. And so it came to pass that I asked for, and got, a Forsberg jersey. It was a birthday or a Christmas present again (don’t recall which), and I loved it. One time I wore it to school, and someone gave me some free candy because I was wearing it. That really happened. (I also wore it to the game that happened February 14th, 2011… oh, the memories.)

I thought I was set, after that. I thought, surely, Forsberg will never leave! Even if Hinote does get traded or something, I’ll always have Foppa! 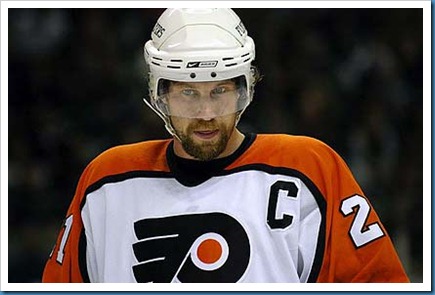 Wow, that hurts to look at.

So… yeah, he left, and I remember listening to an interview on the radio where Forsberg was talking about how he was really going to miss Denver and all the fans there, and I told myself, “crying over hockey is stupid,” but I did it anyway.

(I know he came back twice. That doesn’t make it better.)

Not long after that, Hinote was gone too, and I was now the owner of a jersey of a guy on the Flyers and a guy on the Blues. I was sad. I thought, “I got the jerseys of these guys, and then they both left.” I started to get suspicious. A SUPERSTITION WAS BORN.

The only guy on the team at that point that I really wanted a jersey of was John-Michael Liles. I wanted it baaaaaaad. JML was a favorite of mine from day one of his rookie season. But I restrained myself. I told myself, “the second I get his jersey, he’ll get traded.” I can’t remember if the unceasing trade rumors involving him started before or after this belief of mine was formed, but I held fast.

This past season, after the Stewart-Shattenkirk trade that happened in the middle of the night during the worst week in Avalanche history, I was ruined. I woke up insanely early just to check Twitter and make sure JML hadn’t been traded while I was asleep. On the day of the trade deadline, I was sitting there tweeting and retweeting the #DontTradeLiles hashtag and refreshing my timeline feverishly for any news at all. And miraculously, Liles stayed an Av.

So I thought, like an IDIOT, that he was safe. That surely, SURELY we wouldn’t have gone through all of that if the team didn’t actually want him!

I have no idea why I thought that. None. Blind faith, I suppose, or maybe just blind love of the guy. But I decided my eight-year ban on getting something that said “Liles” on the back was over, and I went online and bought this: 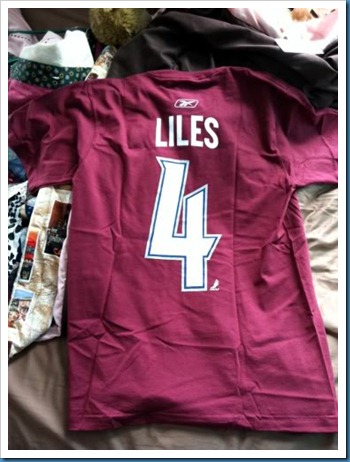 It’s not even a real jersey. It’s a T-SHIRT. IT’S A SHERSEY.

But that’s all it took.

JML, if you ever see this… I’m so sorry. Especially about the air mattress and confusing Ikea furniture.

And I’m even more sorry about breaking this up. 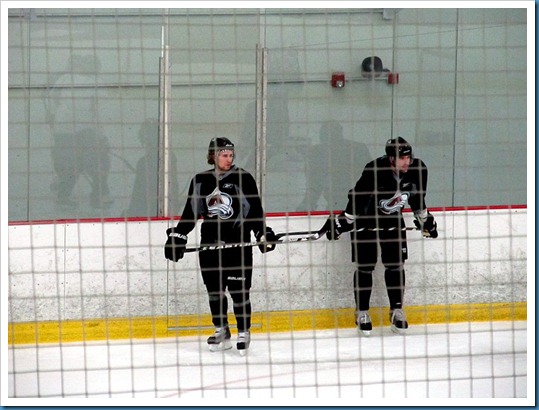 I will never buy another jersey again.*

*This is a flat-out lie. I bought a Duchene jersey at the last game of the 10-11 season and I regret absolutely nothing. Mostly because I feel about as secure owning a Duchene jersey as I would have felt owning a Sakic jersey. Dude is an Avs lifer. They’d have to drag him out of Denver kicking and screaming if they wanted him gone.

**I bought a Liles Leafs shersey. Please don’t judge me. YOU CAN’T CHOOSE WHO YOU LOVE.

Posted by Sarahcastically at 10:16 PM