Tonight, I went to a Kings game. They lost 3-0 to the Oilers. I was bummed, because a) I wanted to hear their goal song, which doesn't happen when the home team gets shut out (maybe that’s obvious, but I’m sort of assuming you’re dumb) and b) the Oilers are in the Avalanche's division and I greatly dislike them because of that fact, and I prefer it when they lose. But oh well.

Anyway, this happened, and it was hilarious: 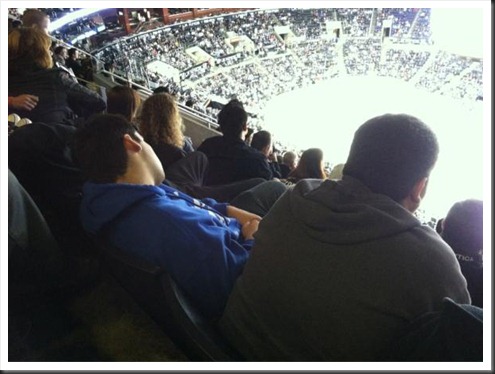 I know it was kind of a boring game if you’re a Kings fan, but really? Dozing off? His friend on the other side of him was falling asleep too. (For the record, I think they were drunk, so maybe that contributed.)

Posted by Sarahcastically at 12:35 AM