Since I’ve decided to get out of California as soon as I can manage it, I’ve had a mental list of things I want to do before I leave. On this list were visits the Staples Center and Honda Center, where the Kings and Ducks play (respectively). My plan obviously was to see the Avalanche play away games at these rinks, but as I’m now leaving before the first time the Avs make a trip out to California, I had to settle for some games I was nowhere close to being emotionally invested in.

I already talked about how boring the Oilers/Kings game was (you know, where the Kings got shut out and the guy in front of me fell asleep). Wednesday I went to see the Nashville Predators play the Ducks in Anaheim, and I made an afternoon out of it.

Let’s talk about the most enjoyable part of that day first.

This is a grilled cheese sandwich made with waffles. 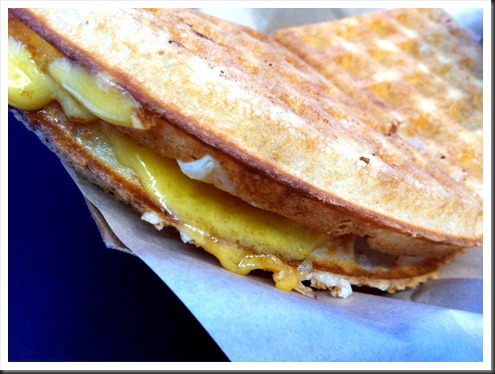 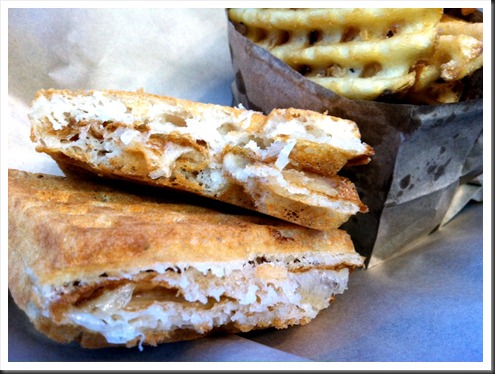 This comes from a sandwich place called Bruxie. I heard about this place from a friend and when I looked it up and saw something called a “Cheesy Bruxie” on the menu, I knew it was just a matter of time before I would be eating there. Waffle sandwiches. Can't pass that up.

I would say this grilled cheese gets mega points for creativity, and it definitely tasted wonderful and was toasted to perfection. Only complaint, I would have liked a little more cheese. I got a side of waffle fries with it (naturally) and they were incredibly tasty as well. Overall this was a pretty great eating experience. The seating was all outdoors and it was a beautiful evening to sit outside and enjoy a waffle sandwich. There was even a guy who walked by and waved at me (not sure if he thought he knew me or if he just thought I was hot - my hair did look really great that day, so who knows). Cheesy Bruxie gets a 9 out of 10. I kind of want to figure out what the best kind of waffle would be to make my own.

Side note, here’s the receipt: 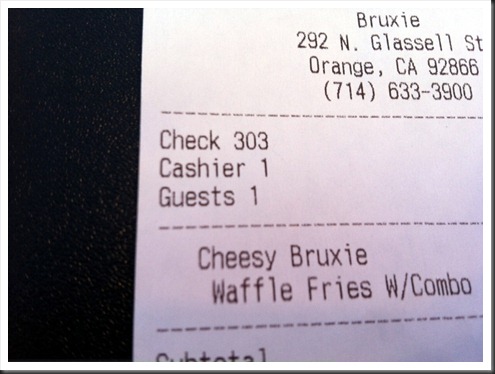 Check 303. I think it’s a sign. (For those who don’t know, 303 is a Colorado area code… and I just realized you do all probably know that, because of the horrible band from Boulder. Well, either way. I liked seeing the number show up.)

Anyway, then I went to the Preds/Ducks game. Anaheim is a really pretty area (at least what I saw of it was nice) but I feel like the entire town is permeated with Disney. It’s like you can smell it in the air. 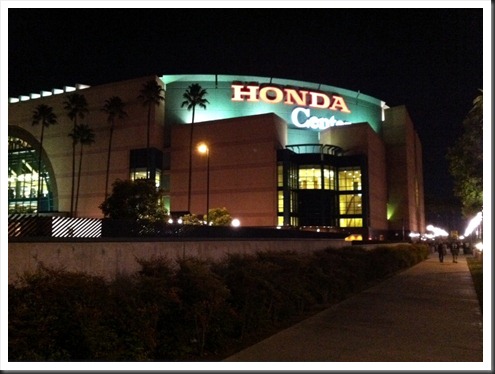 I will say one thing: finding a place to park was incredibly easy.

A bunch of people with signs like this were outside for some reason: 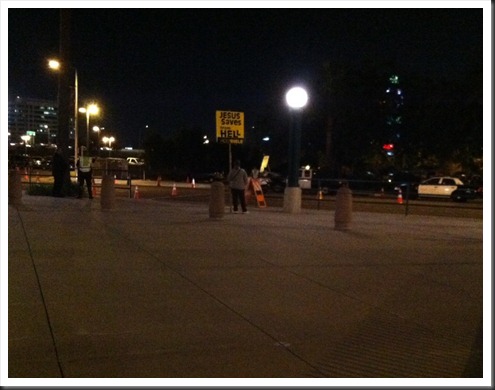 The other side said “GOD LOVES YOU” so at least they weren’t, you know, those other people who call themselves Christians and hold up signs. As far as I saw, these people weren’t screaming or verbally abusing anyone, so that was nice.

The view from my seat: 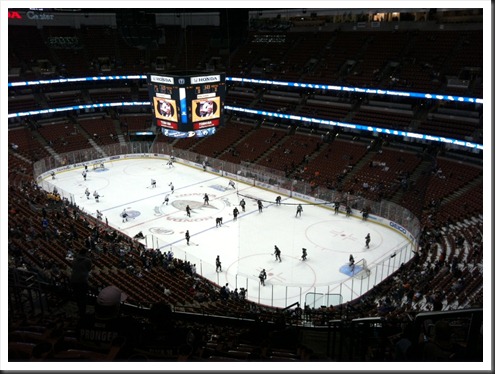 This jumbotron made me feel a little bit better about the one the Pepsi Center has, even though it’s still probably newer.

The Kings have the best jumbotron though: 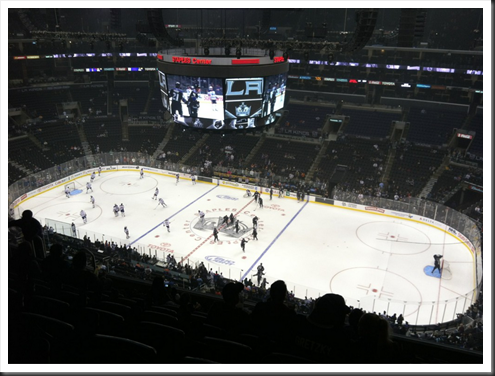 Look at that thing. It’s gorgeous. Either some Avs fans need to come help me steal that thing and take it back to Denver (it’ll totally fit in my Scion XA, no problem) OR we need to figure out how to get a wildly successful NBA team to start playing in the Pepsi Center so someone will actually buy one for us.

Looking at that picture and comparing it to the one of the Honda Center, I realize you can see the ridiculous amount of fog they pump into the Staples Center. It was so hazy and weird. My guess was that this is to make residents of LA feel more comfortable by simulating the air they normally breathe when they go outside.

Anyway... the Ducks lost 4-2, but because they didn’t get shut out like the Kings did, I got to experience their completely awesome goal horn, which is a foghorn you can feel all the way down to the depths of your soul. Here’s a recording of it. So now just imagine that magnified by about a billion, and you still don’t know what it’s like. It was awesome.

I also got to see a penalty shot in person for the first time! It ended up being the game winner. 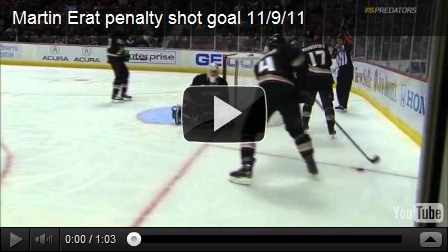 So it was fun and worth the trip. I still left early. Traffic, you know how it is. Also neither of them were my team so I didn’t and still don’t feel bad. (I never leave Avs games early. Not ever. I wouldn’t even do that if they were losing like, 9-1 or something crazy like that!) (That happened.)

Now that I’ve been to Staples and Honda, I’ve officially been to the same number of NHL rinks as I have been to MLB stadiums (Coors Field, Petco Park, and Dodger Stadium). I’ve decided to make it a project when I’m old and rich to go to a hockey game at every arena in the NHL. Until then, I’m pretty sure my grand total is going to stay at three unless I end up in Dallas, St. Louis or Phoenix any time soon (those will be the closest ones to me after I move back to Denver). (It would have to be really soon for Phoenix, because who knows how much longer that’s even going to be an NHL arena…)

I thought about making the trip up to San Jose to see a Sharks game, but tickets were too expensive even on StubHub. So the HP Pavilion will have to wait. 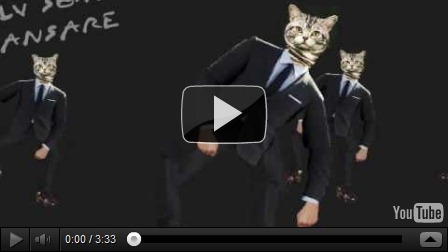 You probably won’t regret watching this.
Posted by Sarahcastically at 3:06 AM