I was looking through some stuff in my closet tonight trying to find a folder I had put together years ago of emails Elizabeth and I sent each other during middle school and early high school. She wanted to put some surely scandalous things we wrote each other about Elijah Wood (we were going to marry him probably, okay?).

Unfortunately (HA) I can’t find it. I seem to have ”lost” it (i.e. threw it away out of embarrassment).

However, I did find a story we tried to write together, and I have decided to share it with you.

I can’t be sure, but I have some recollection of us trying to do this during free time at Awana Scholarship Camp (which I forced her to come to with me, because of all the hot dudes) (yes I know it’s a Christian camp, but I was 14, and my priorities reflected as such). One of us would start a story and then we’d pass it on and the other person would write some more, and back and forth like that. I’m not sure how long this game lasted, as this particular story is only two pages. Elizabeth started this one, so if you don’t think much of the storyline, take it up with her. It’s about some girl with a mom who is “a very British woman” and soon she gets to go to London. And her name is Sandra, for some reason.

It was very hard for me not to make this less stupid as I was typing it up. I’m posting this at great embarrassment to myself and probably also to Elizabeth, and considering I know actual British people who read this blog, I don’t even know why I’m doing this. Just keep in mind that when I say we were fourteen, I mean we were very, very fourteen.

Guess what happened today: Tony kissed me! (ed.: “kissed” is underlined several times for emphasis) Can you believe it? Of course, you’re a diary – it’s your job to believe me!

I wonder if he’ll ask me to go steady – or if he’s just being a guy.

Can’t wait till we leave for London, diary! I’m so excited! Maybe I’ll even get to meet the queen! I can always dream…

Sandra looked up from her journal and sighed. London. It sounded so big and faraway and – exciting. She lifted her dark eyes to her dresser. Her gaze lighted upon a picture of her and Danille Danielle, making weird faces for her mom’s camera. She wrinkled her nose. “Not very distinguished looking,” she criticized aloud.

“Who?” asked a voice. She turned and saw her mom in the door, smiling.

Her mom, a very British woman, come to America as a teenager, looked at the photo. “Oh you look fabulous.” (ed.: How’s that for some skilled background exposition?)

Sandra sighed, then smiled. “I can’t wait to go to London!”

Mom sat down on the floor beside her and hugged her. “You’ll love it!” she said. “You just have to get over that boyfriend of yours long enough for us to have fun. We’re going to be gone for three weeks, you know.”

“Yes, I know… I’ll be so homesick for him. And he’s not really my boyfriend yet, just… sort of a fling at the moment.” She grinned. “But I’m hopeful.”

“Yes well – don’t get too attached! You might meet someone.”

“Now Sandra,” “What’s wrong with British guys?” her mother raised her eyes in surprise. (ed.: Elizabeth your handwriting is horrible.)

“Come on, Mom! What American girl thinks about Englishmen?”

“Well,” a smile pulled at the corners of her mother’s mouth. “Alot of Yanks were enamoured with the Beatles in my day.”

“Mother! The Beatles! Are you crazy? They’re old! You gotta give me a name from today, not a blast from the past!” (ed.: Please note that Elizabeth was obsessed with the Beatles at this time. Overwhelmingly obsessed. She made me watch Help!.)

“It wasn’t that long ago!” protested Mother.

“No, not for you, but I wasn’t born yet.” (ed.: Elizabeth underlined that word.)

“Just the same, keep don’t close your mind to the idea.”

Her mom smiled and left her alone with her diary.

A week later, (and a tearful good-bye to Tony) and Sandra, Danielle, and Mrs. Conley boarded a non-stop flight to London, England. (ed.: That sentence sucks, Elizabeth.)

That’s the end. What a cliffhanger, right? I can’t believe we never returned to such a compelling narrative. We never even met Danielle, who presumably would have been a main character, or Tony, the boyfriend who was probably destined to be ditched for (GASP) a probably hot and probably British guy, who probably listened to The Beatles, even though they’re old.

I would also like to point out that when it says “alot” up there, that is not a typo.

I do have to say I enjoy that my fourteen year old self had Sandra’s mom encouraging her daughter to skank it up on their trip. Boyfriends are lame, Sandra! You never know who you’ll find to “kiss” in London! 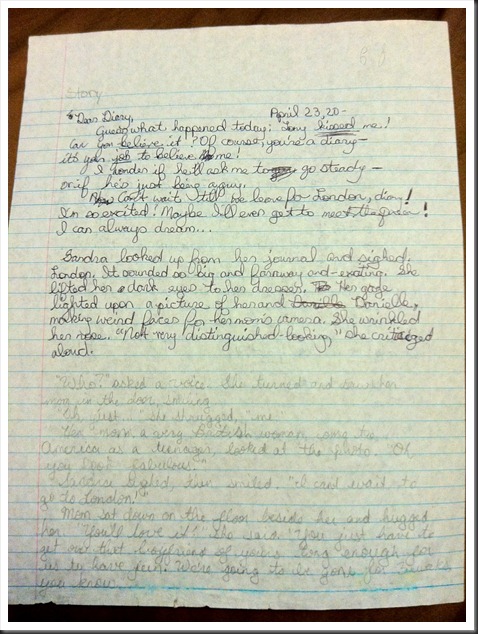 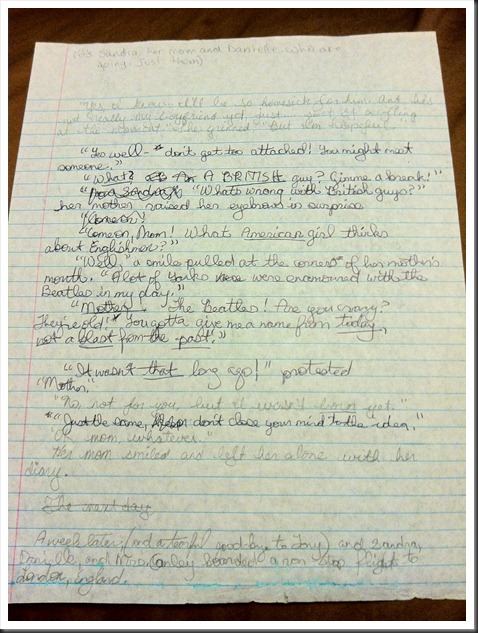 I hope you underline this many words in your post-graduate papers, Elizabeth.

In other news, this is currently the greatest thing on the internet: 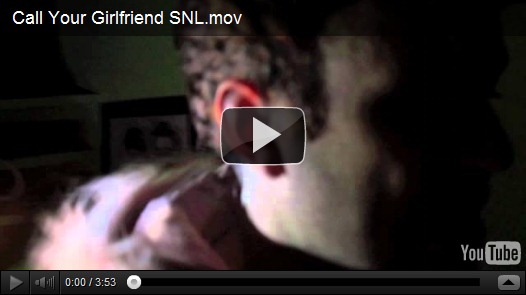 Posted by Sarahcastically at 2:23 AM 6 comments:

Email ThisBlogThis!Share to TwitterShare to FacebookShare to Pinterest
Labels: there's nothing wrong with british guys

Oh, You Wanted to Sleep In?

Well, SLEEP THROUGH THIS. 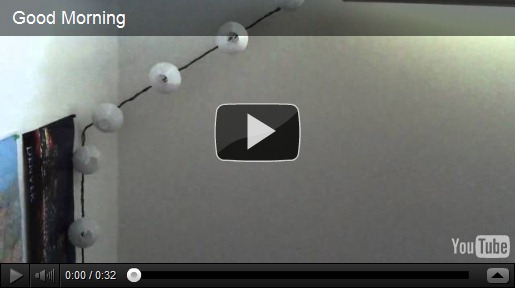 “Yes, we are being as loud as possible doing who knows what.”

That's the view from my bed (air mattress) featuring the noise that woke me up this morning far earlier than I would have preferred. And it's still going on, by the way.

Update, I’m leaving on the 13th. Hopefully for good. Fingers are crossed that the people we have interested in taking over my half of the lease are willing to commit to it in the next couple of days. Either way, I will soon be back in Colorado for Christmas and hockey and family time and cats. I cannot wait.

And the good news is, my parents’ house already got a new roof last summer, so I won’t have to deal with this ridiculous noise.

Posted by Sarahcastically at 10:49 AM No comments: