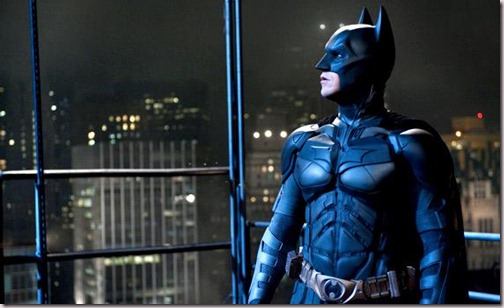 There are a lot of people saying a lot of words about The Dark Knight Rises and the thing that happened. And I thought, for a while, that I wasn’t going to go see this movie, because I thought I wouldn’t want to, just because of the connotation. But I changed my mind today, because I refuse to let it rule me. I completely, one hundred percent understand the position of those who are abstaining from this movie in the wake of what happened, and I am not telling you should do anything you don’t feel comfortable doing. But this is how I am coping with it. I cannot let the actions of a psychopath have any power whatsoever over the way I live my life.

Nolan’s Batman movies are about a lot of things, and this is one of them: not letting yourself be controlled by fear, chaos, pain. They’re about refusing to be defeated, even in the darkest moments of your existence. Even when you feel defeated. You don’t give up. You always get up. You get up and you fight back and you say no. You stare the villains in the face and tell them they have no power and that they are nothing.

I know I would have seen this movie differently if that thing hadn’t happened. I know I wouldn’t have been so hyperaware of the exits and who was around me if that thing hadn’t happened just a few miles from where I live, in the one area of Aurora I’m actually somewhat familiar with. I know I wouldn’t have cared what time of day I went to the theater I’ve grown up going to, where I’ve seen countless midnight showings over the years, if that thing hadn’t happened in another theater to people who are just like me. I know I would have been able to relax and enjoy it much more if this wasn’t looming so large over our community. And I know that it’s going to be a long time before I can go to a movie theater – a place I love, a place where I’ve found so much joy – without thinking about this. I’m not even sure I’ll ever be able to not think about it. But I’m still going to go. I will not let this rule me. I will not let someone whose name does not ever deserve to be mentioned by anyone ever again take this away from me.

When it comes to the actual movie, I liked it. It was pretty good. Catwoman ruled so hard. She almost makes me want to read some DC comics. I thought the ending was somewhat predictable, and it made me wish Nolan had been more JJ Abrams-esque about keeping secrets about this movie, but it doesn’t matter. It’s still good. It still has the potential to inspire, to give people hope. To remind people that in times of darkness, there will always be someone there to shine a light.

We might not have superheroes like Batman or Superman or Captain America in real life, but these are characters that exist to give us courage when villains appear. And there are always villains. Some men just want to watch the world burn. Those men are very real. Yes, it’s true that they could turn up anywhere. But if you think for even a second that we should live our lives in fear of chaos and pain because the villains outnumber the heroes, you’re wrong. You’re so, so wrong.

I’ve heard some people say things about these Batman movies, saying they’re bad for us, that they’re helping to destroy our society by being so violent and dark, that because a line can be drawn connecting them to this unspeakable tragedy, they must be inherently bad. This is not true. And you would know that if you’d seen any any of the interviews with any of the witnesses who were in that theater that night.

I saw those interviews. I stayed up all night watching the local news, and I spent most of Friday doing the same thing, and I saw people – my people, nerdy people like me, the kind of people who go to superhero movies and leave feeling inspired – showing exactly how good and brave and compassionate they are. I saw people who want to believe in heroes and who, that night, became heroes. People who said they wished they could have done more to help, even as they were living through a nightmare. Even as they were dying. At least one of the victims died to save someone else. And frankly, I don’t need a press release to tell me that he wasn’t the only person willing to make that kind of sacrifice that night in that theater. I know it for a fact. If you’re seeing only the monster, if you’re letting him eat away at your faith in humanity, you’re missing something so much bigger and more important.

This is not a time to sit around and bemoan what this world is allegedly coming to. This incident should not be used as an excuse to blame scary pictures for causing one person to do something horrendous. This is a chance to acknowledge that superheroes can, and do, bring out the best in us. Yeah, so they aren’t real. So they have special powers that are impossible for us to have. They have more fictional money than we’d earn in ten lifetimes. So they’re from another world that doesn’t exist. So what? None of that matters. Even if it’s just one line that they throw out that can give us courage in a time that seems so hopeless and frightening, then they’re as real as they need to be.

This is a time to celebrate heroes. They exist, and their number is great. They are as real as the person sitting next to you in the movie theater. And if this is a world full of people who believe that we can be just as heroic as a character in a comic book, then I think… I think we’re doing all right. And I think we’re going to be okay.

Posted by Sarahcastically at 3:54 AM 4 comments:

Email ThisBlogThis!Share to TwitterShare to FacebookShare to Pinterest
Labels: colorado love, so say we all, there's no such thing as just a movie

A Battle For the Ages 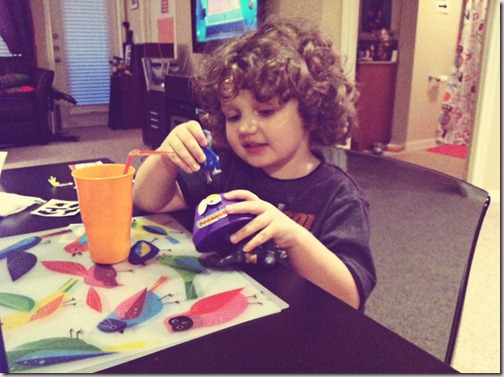 Me: What's happening to him?
Jack: Batman is getting him.
Me: Oh, okay.

(Jack takes a break to drink some orange juice.)
Me: What are Batman and the gorilla doing now?
Jack: (shrugs) I don't know.
Me: Are they done fighting?
Jack: No. The gorilla is sticking his foot in the cage so Batman gets hurt.

Posted by Sarahcastically at 7:55 PM 2 comments:

Email ThisBlogThis!Share to TwitterShare to FacebookShare to Pinterest
Labels: jack attack, orange juice looks just like pee when it's on a paper towel

There’s something weird about visiting your campus for the first time after you’ve graduated and moved away. It felt like time travel, because I felt like I’d never left. The two years between then and now were just a blink of an eye and for about an hour, they slipped away like a dream.

And since I was there during the summer and on a major holiday, the campus was pretty much deserted. There were no newer, younger students to jar me out of my fit of nostalgia. 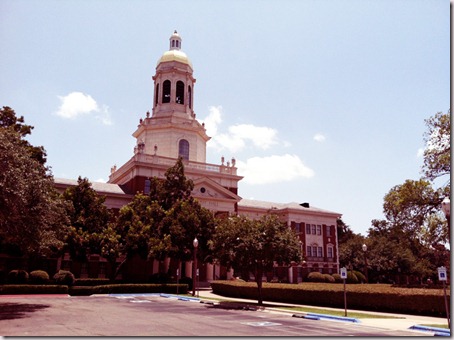 I never went inside this building. 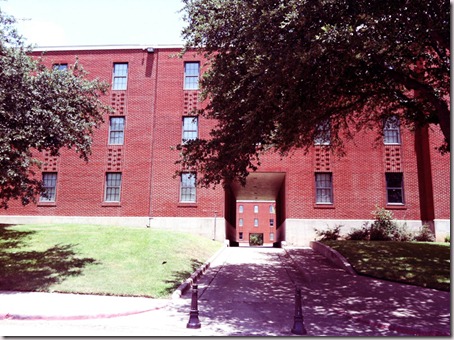 Where I spent my freshman year. 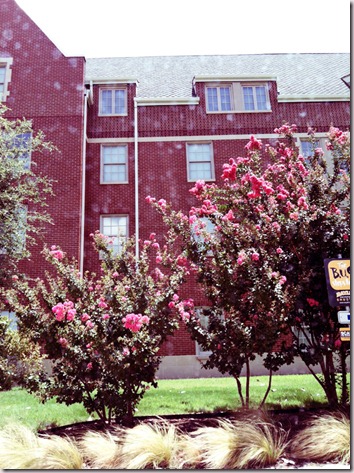 Where I endured my sophomore year. I was the first person to ever occupy that second dorm room on the third floor. (Maybe you’ll notice I didn’t get out of the car to take this picture. Not a lot of great memories in this dorm. Like… zero.) 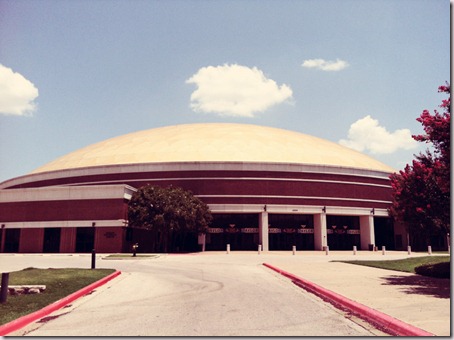 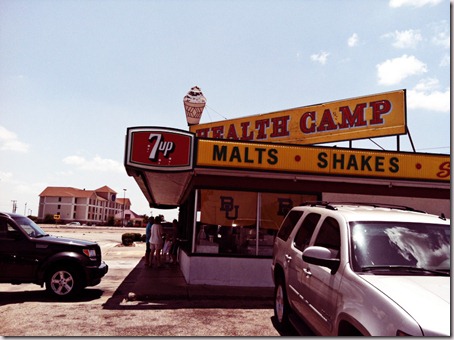 Pretty much my favorite restaurant in the whole wide world. 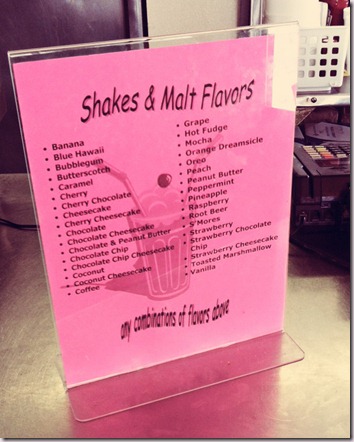 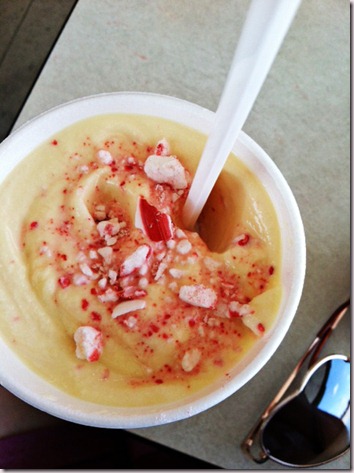 The most delicious peppermint shake in the history of the world (more or less).

I’m going to Texas for a bit today. I’m sure I’ll post more about that soon. In the meantime, here’s a video that makes me happy to be alive. 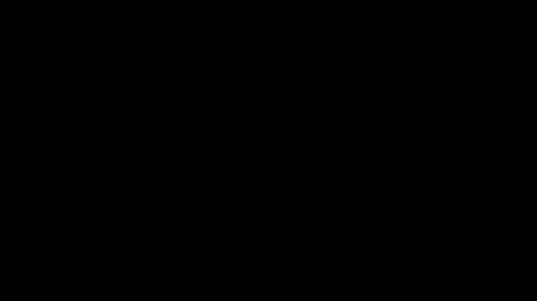 Posted by Sarahcastically at 6:22 AM No comments: