Back From the Dead, Here to Discuss Drunkenly Watching a Lifetime Show

Okay, I realize that I disappeared for... a year... and that no one cares about my blog anymore, if they ever actually did in the first place. If you did care, I'm sorry for abandoning you, I'm still alive, here I am. Since I last posted something substantial, I have switched jobs at the same company against my will, interviewed for multiple new jobs that I did not/have yet to get, obtained two cats (as illustrated in the previous post), aaaaand this weekend I am in fact moving out of that apartment I wrote about before I vanished. Back into my parents' house. (There are legit reasons for this but they're boring and bitter so never mind.) So ultimately, all you missed was a year of me living on my own.

I'm mostly coming back because I miss having a place to write/rant about movies, TV shows, books... basically anything. I have my various outlets for venting other, more serious emotions (no, you cannot have the link) so I've decided to come back to this blog for more fun things. For example, last night I watched the second episode of Under the Gunn with my friends and alcohol, and we made up a drinking game for it. It wasn't exactly "organized" or anything, but I have a list.

For anyone who is uninformed, Under the Gunn is the new show Lifetime has created to fill their current Project Runway void. They are being forced to take a break from Project Runway (rightfully so, frankly, it has been on in some form or another for like two straight years) due to Heidi Klum being just like too busy or whatever. And as I learned from his interview on The Daily Show, Tim Gunn had a "pinky promise" with Heidi to never do a season of Project Runway without the other. Thus, when Lifetime came to Tim and was like "we'll just get a new host," he was all "no." To which Lifetime evidently replied, "oh okay, we'll just give you your own show then, it's cool."

The basic premise is the exact same as Project Runway, except there are mentors with teams. So it's a hybrid of The Voice, just like every other reality competition show like this, but whatever, I can roll with this trend. The mentors are Anya, the kaftan lady who didn't know how to sew when she won Project Runway; Nick Verreos, who never won the show but is like everywhere; and Mondo, who they basically created Project Runway All Stars for, to correct the mistake that was him losing on his season. Also, he is from Denver, and I've met him, and he wears insane things and is awesome. Maybe I'm Team Mondo already, maybe I'm not. (I can't remember if I like anyone on his team, the first episode was last week and I already forgot everything that happened, and last night we drunkenly talked over almost every single thing that happened. So jury's still out.)

So here is the list we made for our drinking game. I will attempt to explain things better than I originally wrote them down.

1. "Tim Gunn vocabulary." This was intended to mean "drink every time Tim Gunn uses a big word you need to look up." I think I made up this rule because he said "inextricable" last week, which is a word I actually do know, but that is beside the point.

2. Drink every time someone cries.

5. "Drink every time C can't get over that lady's outfit." I wrote this down because there was someone my friend described in a term I don't specifically remember but it was something about being a porcupine pirate from Brazil. Lesson learned, this is what happens when you force a guy who wears fleece camo hoodies to work AND then also to the bar afterwards to watch a show full of eccentric fashion people.

6. Drink every time a designer says they were "born to do this" or that they're "here to win."

7. Drink every time you say the same judgy thing as someone on the show. Someone made a sweater tunic and when it was going down the runway I said it looked like a grandma's poncho, and then Nick's voiceover also used the word "grandma" to describe it, and then there were high fives all around.

So there you go, that's our drinking game, and by the way we didn't even follow it at all, we drank whenever we wanted because that's how we roll.

Anyway, I'm going to be dumping more pointless things like this on here going forward so... stay tuned! If you want. It's your life, do what you want.

I will be back when I can figure out a template I don't hate.

In the meantime, here is a picture of my lil' buddies. The grey lady is Heidi Klum and the orange poofball is Tilda "Tilly" Swinton. 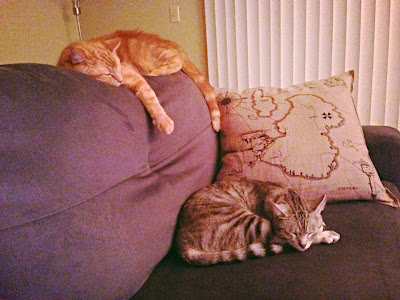 Posted by Sarahcastically at 9:35 PM No comments:

Email ThisBlogThis!Share to TwitterShare to FacebookShare to Pinterest
Labels: anybody out there?
Newer Posts Older Posts Home
Subscribe to: Posts (Atom)