Books That Are Good That You Should Read: The Grisha Trilogy

I just finished the first two books of Leigh Bardugo's fantastic Grisha Trilogy, Shadow and Bone and Siege and Storm. They were so good and thus warrants a blog post. I will try to actually discuss the books instead of just gushing all over everything about how much I loved them. Please understand that I am restraining myself an incredible amount to do this. 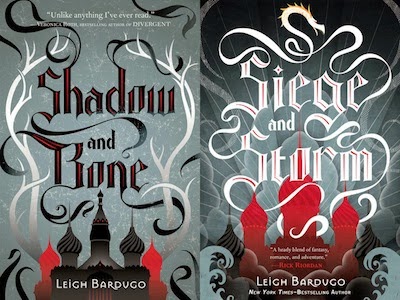 I honestly haven't read anything like this. There are elements that are similar to others, but Leigh Bardugo takes those elements and uses them to transcend them into making something completely original and great. The books take place in an ancient Russia-like country called Ravka. Something evil called the Fold, or sometimes the Unsea, has plagued their country for decades, maybe more. It is a swath of just darkness that crosses their land and inside are horrors no one wants to face. Alina Starkov, the main character, and her longtime best friend Mal (who she also happens to be in love with) are members of the First Army and at the beginning of Shadow and Bone their regiment has been chosen to attempt to cross the Fold. When they do, the volcra attack - giant winged dragon monsters who basically just hunger for human flesh and devour anyone they can. Mal gets brutally injured by one of them and is almost certainly going to die, but then Alina puts herself between him and the monster and - miraculously, a bright flash of light drives the volcra away. Nobody understands it, least of all Alina.

It turns out Alina has been a Grisha all along. The Grisha make up Ravka's Second Army. They are people who were born with gifts, special powers. There are three different kinds - Fabrikators, Corporalki, Materialki - and they all have different specialties within their category, but no one is like Alina. Alina is a Sun Summoner. She can control light. The leader of the Grisha, called only The Darkling, is essentially her opposite - he can control darkness. He sees in Alina an opportunity to control the Fold, the darkness covering their land, and - he says - remove it entirely. But of course nothing about it is that simple.

All of the characters in these books are so well-wrought. I love them, even when I hate them because of their poor choices. The love story that blossoms - well, love stories, really, there are several by the end of the second book - was the first one that I've been actually invested in since... well, probably since Harry Potter, honestly. I haven't cared this much about a cast of characters since the Harry Potter series.

I want to write a more spoilery review of these two books but I KNOW people coming across this post haven't read them and I don't want to risk ruining them for anyone. To anyone seeing this post, I implore you to find these books and read them. Jump on this train before it's cool to, because I would be shocked if they don't blow up soon. Somebody already owns the movie rights, and I hope with all my hope that they will do this story the justice it deserves.

And deffffffinitely get on board before book three comes out in June: Ruin and Rising. IT WILL BE EPIC. 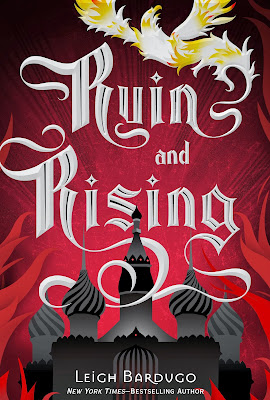 Posted by Sarahcastically at 9:32 PM