A Cheap Trick and a Cheesy One-Liner

Three Marvel movies have come out since I last wrote any posts about any of them... I guess I have some catching up to do. And I don't mind going back and analyzing these particular three movies (Iron Man 3, Thor 2: The Dark World, Captain America 2: The Winter Soldier) because I deeply enjoyed all three.

So here we go. 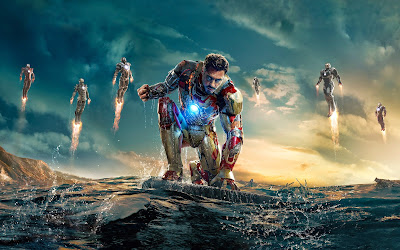 If you read any of my previous posts about the other Iron Man movies (as apparently a ton of people have, going off what the Blogger stats page tells me), you are aware that I do not much like Tony Stark. I think he's an arrogant douche. But now that we're on the third movie focusing on him, and the fourth movie where he plays an integral role, he is by far the most developed character in the Marvel movie franchise. And that character development has been an extremely rewarding journey.

An aside before we go into that: I wish we could come up with some fresher motivations for villainy in hero stories. I'm getting very bored with the idealist who turns evil because of some real or perceived slight against them on the part of the hero. I'd also like to see less of the trope where an experiment fries the inhibitors preventing someone from acting on their villainous tendencies, the ones that were socialized into submission to some degree. It is convenient to have villains with such cut and dry motives - they rejected me and now I have to prove them wrong," or "I can literally no longer stop myself from acting on my urges due to grievous injury to my mind" - because that makes it much easier to cheer for the hero as they lay on the beatdown. But I think it is much more interesting when the villain is just as human as the hero is. (This clearly explains why I am so interested in Loki as a character - yes, I'm aware he isn't actually human, but the brother bond between him and Thor humanizes him in a figurative sense. More on this in a later post!)

In Tony's voiceover at the start of this film, he says "I'm different now. I'm a changed man." This is true, but not just because he gave up the party scene and stopped being (quite as) rude to people at galas. He's not sleeping, and when he does he has nightmares. He has an anxiety attack when two kids try to talk to him about what he did at the end of The Avengers. He's shaken. He obviously has PTSD, even though he denies it. He's trying to figure out how to be the person his actions in the previous movie made him into.

This movie strips everything away from Tony. His home and laboratory gets destroyed. His confidence in himself - possibly the only thing besides money that he's always been able to count on - is shattered. He is forced to rebuild himself from the ground up. He has to teach himself how to be himself again. (And I think you'd be hard pressed to find anyone who could play that better than Robert Downey, Jr. can.)

That scene in The Avengers where Steve asks Tony what he is without his armor - that gets answered in this movie. My favorite battle sequence in this movie is when Tony infiltrates the Mandarin's compound with all the makeshift weapons he built instead of the suit. This is him without the armor - a ruthless genius warrior. And I've seen people arguing that Steve was dumb to ask him that, that of course Tony can do all that stuff without his suit. But putting aside the fact that I will always side with Steve Rogers over Tony Stark - I don't think that at that point, when Steve asks him that question, that Tony could. He would have thought of something, naturally, he is a genius, after all. But he hadn't sacrificed himself on behalf of the entire world yet. He was not yet a person who had been faced with losing everything. He wasn't someone who would let himself be stranded in a small town in Tennessee and improvise a plan to thwart a terrorist plot with the help of a little kid.

This movie basically takes that question Steve asks and extrapolates it into a full-on journey for Tony. I'm glad this movie went there. I'm glad it didn't gloss over what Tony did in The Avengers. My favorite thing about what Marvel is doing with their franchise is that they can do this kind of character development. I really genuinely loved Iron Man 3, which I wasn't able to say about the other Iron Man movies. For the first time, I liked Tony. I'm very excited to see what he'll be like in Age of Ultron after seeing how he's grown as a person.

Another thing I very much enjoyed: Pepper. The relationship between her and Tony has evolved and matured and in this they're true partners. (This movie even passes the Bechdel Test, when Maya and Pepper talk in the hotel room! A true accomplishment for a superhero movie.) (Sarcasm. Though it was nice to have a scene like that, and I hope for more in future movies.) It was great getting to see Pepper not only in the Iron Man suit briefly, but also being ridiculously awesome at the end with her Extremis powers. I understand why she had those powers reversed, but I was almost sad about it. Maybe now that she knows how exhilarating it is to wear the suit she'll get Tony to make her one of her own. Fingers crossed.

Posted by Sarahcastically at 8:07 PM No comments: