I have been buying so many books. TOO MANY. I have discovered a thing called BookTube, which is just a bunch of people on YouTube who vlog about books. And while I have no plans to start my own BookTube channel (I am lacking a decent camera setup), I have been hoarding book recommendations like crazy. My Goodreads To Read list is getting ridiculous. It's fine, though, because as a person who wants to be a writer, buying tons of books can be justified as research. That is now and will forever be my excuse.

Anyway, here is a picture of the books I have recently obtained: 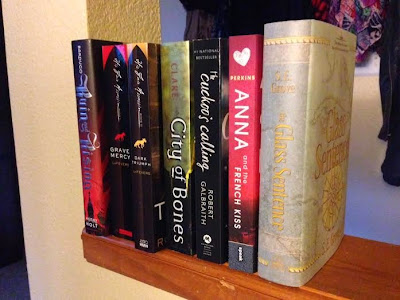 This picture did not turn out as great as I wanted it to but I already put them away and I don't feel like redoing it because I'm lazy and it's Friday night and so here is this crappy picture, I'm sorry for failing you with it.

Ruin and Rising by Leigh Bardugo. Okay, I have talked about the first two books of the Grisha trilogy on here previously. This is the conclusion to that trilogy. I am not going to give too much away here, because I don't want to ruin anything for anybody, but personally, I thought this final book was a perfect ending to the story. I've seen some haters here and there who were complaining about it for various reasons but I am ignoring them. This book is great, this trilogy is great, Leigh Bardugo is great... everything. Is great. And Leigh said on twitter that she's writing another series set in the same universe so that is very exciting! There is definitely a lot of room for more to happen in the world she created so I can't wait to see what she writes about it next.

Grave Mercy and Dark Triumph by Robin LeFevers. These are book one and two of the His Fair Assassin trilogy (?) (as far as I know there are only going to be three). I've already read Grave Mercy and I loved it. It is very hard for me not to love a book about assassin nuns who aren't really nuns because they fall in love. And murder people. But the murdering is sanctioned by the god they serve so it's fine. Also, they kill bad people, like rapists and traitors. I've been reading Dark Triumph and I'm not loving it as much as the first one, but it's still really great. This series is full of awesome ladies and I'm super excited for the third one, Mortal Heart, to come out later this year.

City of Bones by Cassandra Clare. This one is on here because of all the BookTubers who were talking about the newest and I guess final book in this series by her. BookTube people seem to love this series a ton, but I have heard mixed things about it elsewhere. So I don't know if I'm going to like it. We will see!

The Cuckoo's Calling by Robert Galbraith. AKA JK Rowling if you did not know. That's mainly the only reason I want to read this, or finish reading it since I started it on my iPad. I got the hard copy of it since it was out in paperback finally and I prefer paperbacks. (I know I'm the only one on the planet who does, but they are just lighter to carry around which is what I like... unless I TRULY adore the book and want it to last forever. Then I buy the hardback.) I enjoy mystery novels as long as they are clearly more than just a procedural type of book and have interesting characters. I just read Gillian Flynn's Gone Girl and Dark Places and really loved them. While I know that it is not possible for JKR to have written something as messed up as those books are (I assume anyway), I am still really looking forward to this one, and then The Silkworm one day when that is in paperback.

Anna and the French Kiss by Stephanie Perkins. I have heard soooooo many people whose opinion I respect talk about how great this book is, so I'm glad I finally have it. I don't usually gravitate towards contemporary books, I'm more into sci fi/fantasy stuff, but I'm making an exception because it's possible I could love it the way I loved Eleanor & Park and/or The Fault in Our Stars. Also it's set in France, which is a place I very much desire to visit, so I'm hopeful I'll really enjoy this one.

The Glass Sentence by S.E. Grove. This book looks SO COOL. For some reason, each continent on earth exists in a different time period. I love this idea, I think it is so ridiculously original and interesting, and I haven't tried to find out more than that about this book because I don't want to risk spoiling anything for myself about it. I'm probably going to be reading this one next once I finish Dark Triumph because I've been obsessed with it since I heard about it.

It feels like I've bought more books than this recently... and I probably have but this is all I remembered at the time I decided on a whim to write this post. I am sure that if I have any intense feelings about any of these, you will be hearing all about it.

Posted by Sarahcastically at 9:05 PM

Email ThisBlogThis!Share to TwitterShare to FacebookShare to Pinterest
Labels: booooooooooks